by The Size Queens 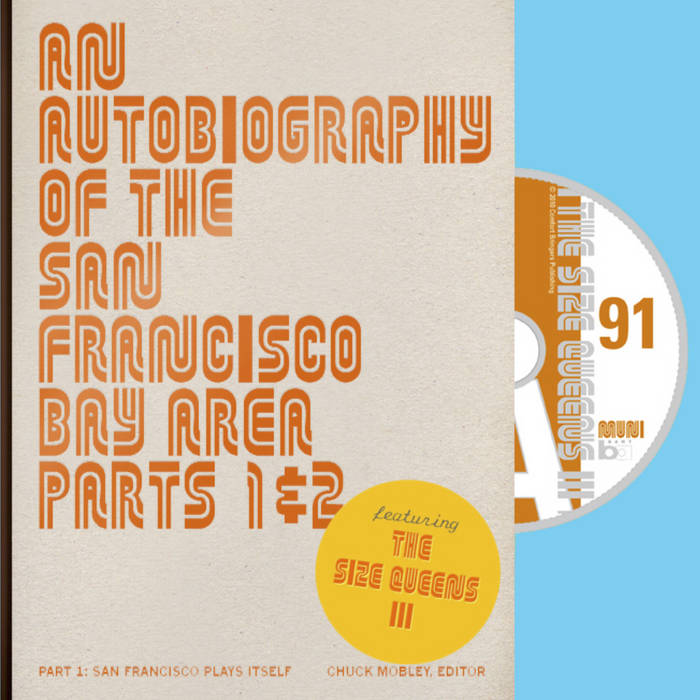 The Size Queens III was released as part of the SF Camerawork publication "An Autobiography of the San Francisco Bay Area; Part 1: San Francisco Plays Itself"
Visit:
www.sfcamerawork.org
"The Size Queens are double-sized or rather double-sided, I mean to say that they have double vision and double hearts. They are playful and serious, sparkling and sludgy, cruel, kind, capacious, intensely private, and alone." —Mary Gaitskill

SAN FRANCISCO — The Size Queens’ III is a wild ride through San Francisco life in a very dicey phase of its history: the late 80s and early 90s. Set in or around a decaying residence hotel (Top of The Stairwell), the songs mark a trajectory from jubilant bohemianism, to an almost radioactive environment as friends die off. Songs like Downtown sparkle with horns, a pop veneer masking the lyric’s grim suggestion of misfortune: “there’s a church that feeds us for free.” Similarly, Have You Seen Her Dance? is a hokey rave-up underscored by its angry protagonist jerking around “like she’s angry at her father.” The record darkens as it progresses. On Dreamsong, Old Skin, and Birds and The Bay the characters surmount a deluge of challenges: addiction and AIDS, cancer, poverty, remorse—all confronted with quixotic optimism, a dire fit of inappropriate laughter.

The album is broken into three distinct sections by variations of The Alley Cat Song, a “low standard” the band used to carry the theme of feral, un-housetrained but lovable people one can’t help feeding every now and then. From the first song Tenderloin Hotel 1991 to the last, epic Twenty Minutes, it’s a world of bad decisions (or no decisions, just bad ends), madness, iffy alternative treatments, lengthy hallucinogenic dreams in sweat- soaked beds, runaway kids taking walks on the wild side (and taking significantly greater risks to do so), desperate getaways, car chases and police shootouts, a vast tenderloin parade of the unhealed and the unwilling to be saved. The last song is a journey through the afterlife, culminating in a shattering appearance by performance artist Guillermo Gómez-Peña as The God of Permission, who allows all the departed souls to return to their old, piss-in-the-sink hotel rooms—not for redemption, or to be absolved—but to gather up a few of their meager items, get high a last time, and listen to songs they loved. Gómez-Peña performs a shamanic exorcism and in effect blesses this community of the diseased, the mad and the outcast, granting them 20 more minutes of life on earth to do “whatever the hell you want.”

Last year, The Size Queens were commissioned by Princeton University and The University of Chicago to write songs for the performance event, Our Literal Speed, and were buoyed along on the praise of Rick Moody and Michael Snediker’s 9,000-word review of their last CD, Magic Dollar Shoppe. They now return with their third album, beautifully packaged in the exhibition catalogue for SF Camerawork's San Francisco Plays Itself. The two-part exhibition explores autobiography and personal histories, lucidly depicting the city’s unique character and characters.

While curator Chuck Mobley was assembling the exhibition and catalogue last summer, The Size Queens were working in a nearby studio on a similar project in song. While III is not an explicit soundtrack to the exhibition, it does have a conceptual, and in many ways coincidental, relationship to the accompanying catalogue’s subject matter. Mary Ellen Mark's portrait of author/literary trickster J.T. LeRoy aka Laura Albert is a case in point. LeRoy was one of the first writers ever to review the early work of The Size Queens’ co-writers, Adam Klein and Michael Mullen, so Laura Albert was asked into the studio to take on a new persona: Liz from the song, Hot Frizz. In an edgy cameo, Albert makes a desperate phone call (a direct appropriation of Yoko Ono's Telephone Piece), referencing the way singer Adam Klein, and many other writers and musicians in the 90s, came to know LeRoy. The catalogue also includes Catherine Opie’s photograph of the painter, Jerome Caja. Klein authored a monograph about the painter, Jerome: After the Pageant and this drag saint saunters through these songs, at one moment working a go-go cage, and the next going blind in his painting studio. One of the photos in the catalogue, Ken Miller’s portrait of then little-known author William Vollmann, was taken in Klein’s Geary Street basement apartment. Another figure alluded to in the songs, Jayne St. Mansonfield, was an artist model for the young Joel-Peter Witkin. Nearly twenty years after the shutter closed, these lives resurfaced simultaneously in the personal archaeology of The Size Queens’ latest recordings, and in SF Camerawork’s blockbuster exhibition.

All songs are by Klein and Mullen except The Alley Cat Song. The Size Queens’ III also features Carlos Forster (formerly of For Stars), Danny Pearson (American Music Club), Glen Swarts, Guillermo Gómez-Peña, John Murry (Bob Frank and John Murry), Laura Albert, Mike Carnahan, Nicole Brodsky, Terese Taylor and Tim Mooney (American Music Club). The record was produced and engineered by Tim Mooney and recorded at Closer Recording, San Francisco during the summer of 2009; it was mastered by Sean Coleman in Dublin, Ireland in October 2009 and all packaging concerns were handled by Anthony Laurino for SF Camerawork.

THE SIZE QUEENS 2005-2017
After 12 years, 8 records and 1 EP, the loose-knit group of artists and activists, musicians and poets quietly and amicably disbanded and the art rock experiment that was The Size Queens was completed.

Bandcamp Daily  your guide to the world of Bandcamp

Cannibal Corpse's George "Corpsegrinder" Fisher stops by for an interview